Again I have been taking these for almost two weeks now and don't feel any difference. No negative or positive effects at all. I'm kind of disappointed because I take shilajit and absolutely feel the difference it makes. I was hoping for the same results from these probiotics but no such luck. I will up my daily dosage in a few days and take till I run out of this bottle as well since I don't seem to be experiencing any negative side effects. Hopefully I will feel some positive effects with a higher dose. If not I will not purchase this again.

A
Anonymous (Denver, US)
Repair your Gut

I have been taking these for 2 months now. I feel like i am a new person. I am not suffering from the severe acid reflux i usually deal with every day. I am about to order another bottle. I will probably take these for the rest of my life. 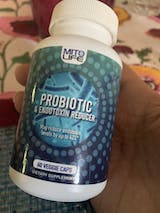 I’ve been taking this for a month and have definitely noticed a difference. I take it right before breakfast. I had amennorhea for a year and a half and a CLF/ray peat style diet the past 3 weeks combined with this, the shilajit, dissolve it all and daily raw carrot salad got me my period back in about 3-4 weeks. Would highly reccomend and plan to continue using.

I take this if I eat a meal with a steak to help my pancreas. And have recently started taking it with my daily carrot salad!

5 stars! I had been taking Prilosec/omeprazole for over a year for acid reflux but was never really comfortable with it. SO happy I found this! It worked right away which I was so surprised with. Really greatful for Matt Blackburn and all his wisdom.