Resilien-C is a whole food source of vitamin C.

It is not better than or safer than ascorbic acid/vitamin C.

For those that are afraid to take isolated nutrients such as ascorbic acid, Resilien-C is a great alternative.

The only thing is that you have to consume a large amount of whole food C to get the same amount of vitamin C as concentrated ascorbic acid powder or capsules.

The bioflavonoids have unique effects separate from ascorbic acid including:

Rutin, a bioflavonoid in whole food vitamin C, attaches to iron (Fe2+) and prevents it from binding to hydrogen peroxide, called the Fenton Reaction. It also decreases capillary permeability, making the capillaries less leaky and improving circulation. It is also neuroprotective, hepatoprotective, antihypertensive, antivaricose, an internal sunscreen, and an immunomodulator.

I appreciate this team’s relentless forward progress in making quality great nutrition that helps me have a kickass life. Thank you mitolife. Vitamin C in my day is a game changer. I make sure to take them everyday! Love you guys! 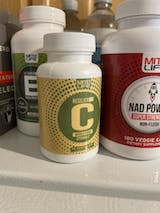 I started taking this 4 weeks ago when I was completely wiped out with a virus. Only 2 per day. But now I’m starting to feel the benefits. Feeling better than my old self even with lots more energy and positive thoughts.

R
Rhonda Zeng (Southlake, US)
love every product of Mitolife

my whole family have been taking most products from mitolife. We noticed a big benefit for our health. I really appreciate the mitolife product and I will plan to keep purchasing them.

I trust this product to be of high quality. It is nice to finally have a Vitamin C supplement that I believe will enhance my health